Please reload/refresh page to see the newest column. Thank you.

When the Bill Comes Due 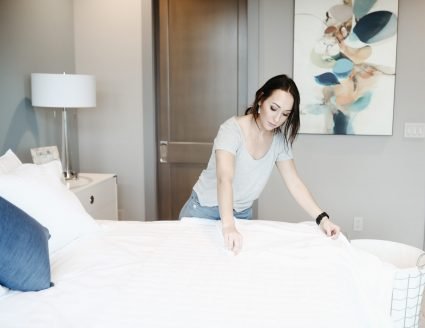 My husband and I have three beautiful daughters ages 10, two, and one. We do not communicate at all, and I feel as though I am dead. My husband keeps telling me he does not know how to love or communicate with someone, because he was never shown it as a child. I’m sick of hearing it.

He is 40 and I am 34. We have been married 13 years this September. He is a great guy, but I cannot go on “living alone.” I take antidepressants to cope with how I feel. We have not made love in over three months, and when we tried last week, I just could not do it and asked him to please get off me.

I do not believe a man can go that long without it, so now I think he is cheating on me, on top of everything else. I don’t know what to do anymore, and I don’t have any answers.

When I ask my mom, I get, “You knew what he was like when you married him. You made your bed, now lie in it.” I’m too young to feel this way, and I (we) need help badly.

Ariana, your mother tersely stated the issue. You are no longer satisfied with a man who is as he has always been. You should have had no expectation he would be different after the wedding, because people don’t change easily. They are not like Mr. Potato Head.

We could give you a litany of relationship tips, but they won’t work because people quickly revert to the personality they developed over decades.

Your husband did nothing wrong, but you did. That is why you want to claim innocence and accuse him of cheating. Often when we suspect another, we unwittingly admit what we have been thinking about. Do you see cheating as a steppingstone to finding your next husband, or are you simply accusing him as a way to get out of your marriage?

You didn’t leave when your first child was two or five or seven. Things were working well enough, that in a recent period of two years, you had two more children with your husband. Have you been hoping each year he would turn into someone different? Or is there more to your connection, and you are at a temporary low?

That is for you to decide.

We don’t agree with your mother when she said, “You made your bed, now lie in it.” That statement says there is no allowance for us to correct our mistakes. Perhaps you thought your mistake would only affect you, but now it is affecting others.

The thing is, none of them made a mistake. Don’t point a finger at your husband and say it is his fault. He is a man putting up with a wife he didn’t know he wasn’t right for. He has an equal right to wish you were still the woman he married.

Mistake correction is never fun. It’s a messy business because life doesn’t have a backspace or a delete key. So consider this. You can’t continue to be the same woman, doing what you have always done, acting with no real thought behind your actions. You need help, counseling, to understand how you got to this point.

You would like a solution without repercussions to you, but that is not possible. You don’t need drugs for what you did because medicine has no power to fix this. That is like saying, “I don’t want anyone to know I broke my leg, so I will take painkillers instead of getting the bone set.”

If you decide to leave the marriage, don’t handle things in a way that makes them worse. Remember your husband also needs to recover from what happened. A woman married him who didn’t love him for who he is.