Q About 16 years ago, I fell in love with an elegant, well-educated, good-looking woman. We were madly in love and became a couple. I had just stepped out of a bad separation, but her divorce was even worse.

Our relationship soon got disturbed by strange events on her side, mostly when alcohol was involved—extreme jealousy, silence, and a domineering attitude.  Sometimes she sent me away; other times I left the scene because I could not cope.  On one Christmas Eve holiday she left me at the dinner table, took a plane, and went home. 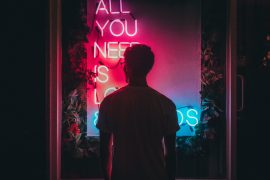 My attempts to get her back were amazing; I even painted messages on the walls on the way to her house.  A couple of times I tried to forget her with another relationship, but after some months I missed her so much I went back.  She always received me with open arms, and we started all over again.

Strangely, during our separations she never tried to contact me or explain her attitude.  Last year I gave it one last try, and she coldly asked me to leave.  I left heartbroken and burned my bridges, even sending her a nasty e-mail for the first time.  Since then she haunts my mind; she was the love of my life.  How can I get over this without hurting myself any longer?

In 16 years a child could go from the first day in school to a university degree.  In that same period you could have had a 16 year marriage to the right person.  But you kept going back to something which was not working, and now, because you have not found another to be with, you focus on the good times with her.

She was with you because of her personality quirks and perhaps her alcoholism.  Without those quirks and that habit, would she have been with you at all?  If she were sober now, would she want you in her life as a reminder of her befuddled past?

Some people can only quit a bad habit when it goes to an extreme.  They won’t watch their weight until they need to inject insulin.  They won’t quit chewing tobacco until they’ve lost part of their cheek or gum.  They are always behind, always in arrears.  Their books are always overdue.

If you are going to have someone for the rest of your life, be open to it now.  Life never goes backwards.  It goes forward.